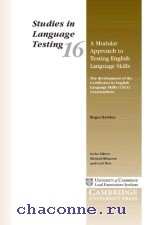 2 049
уведомить о поступлении
Documents the development of the Cambridge ESOL Certificates in English Language Skills (CELS), a suite of modular examinations first offered in 2002. As a context for how CELS was conceived, developed, constructed, validated and managed, the book traces the history of exams which have influenced CELS. The Royal Society of Arts (RSA), later UCLES (University of Cambridge Local Examinations Syndicate) Communicative Use of English as a Foreign Language examinations (CUEFL) was one such influence, as were the Certificates in Communication Skills in English (CCSE), these exams being a development of the CUEFL. The University of Oxford Delegacy of Local Examinations (UODLE) examinations, taken over by UCLES in 1995, were a further influence on CELS. UODLE itself had worked in partnership with the Association of Recognised Language Schools (ARELS) Examinations Trust, the Oxford EFL reading and writing exams for many years offered in tandem with the ARELS Oral English exams.
показать полностью