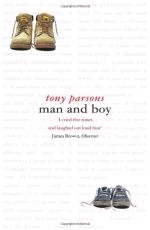 уведомить о поступлении
"Some situations to avoid when preparing for your all-important, finally-I-am-fully-grown thirtieth birthday. Having a one-night stand with a colleague from work. The rash purchase of luxury items you can't afford. Being left by your wife. Losing your job. Suddenly becoming a single parent. If you are coming up to 30, whatever you do, don't do any of that. It will fuck up your whole day. So begins Man and Boy, Tony Parson's foray into fiction. Or non-fiction. Rumoured to be a roman a clef, the well-known journalist and broadcaster writes the story of a successful TV executive who brings up his child alone after a failed marriage--much like Parson's own life. Harry Silver, the book's anti-hero, has it all: a beautiful wife, an angelic son and a high-paying job. His life is just about perfect, until one night he casually sleeps with a slim redheaded coworker who has "that kind of fine Irish skin that is so pale it looks as though it has never seen the sun". After the fateful night, his life falls apart. He loses his job and his wife in rapid succession, and finds himself a single, unemployed parent. It is an excellent education for a man who up until now has been immature and irresponsible, and Parsons has some strong points to make about the puerility of far too many contemporary males: "Being a man is like being chained to the village idiot." At times he piles on the disasters and plot-twists a little too thickly, but the ending is wildly romantic, redemptive and optimistic. In other words, Harry grows up. -- Christopher Hart
показать полностью