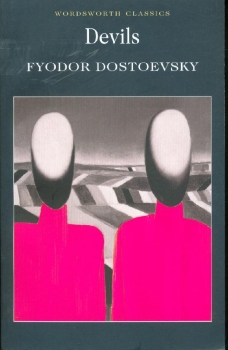 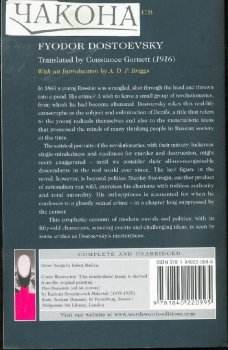 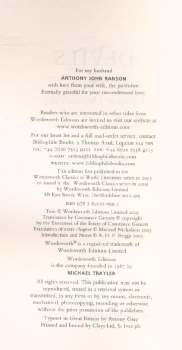 473
This title includes an introduction by A.D.P. Briggs and translated by Constance Garnett. In 1869 a young Russian was strangled, shot through the head and thrown into a pond. His crime? A wish to leave small group of violent revolutionaries, from which he had become alienated. Dostoevsky takes this real-life catastrophe as the subject and culmination of "Devils", a title that refers the young radicals themselves and also to the materialistic ideas that possessed the minds of many thinking people Russian society at the time. The satirical portraits of the revolutionaries, with their naivety, ludicrous single-mindedness and readiness for murder and destruction, might seem exaggerated - until we consider their all-too-recognisable descendants in the real world ever since. The key figure in the novel, however, is beyond politics. Nikolay Stavrogin, another product of rationalism run wild, exercises his charisma with ruthless authority and total amorality. His unhappiness is accounted for when he confesses to a ghastly sexual crime - in a chapter long suppressed by the censor. This prophetic account of modern morals and politics, with its fifty-odd characters, amazing events and challenging ideas, is seen by some critics as Dostoevsky's masterpiece.
показать полностью